I have way more than expected to share with you guys, I used up a lot of products and I’m not sure why, I think it just lined up that way. Or I am just getting much better at actually using products up and focusing on one or two so I can get through them. I can’t process the idea that I might one day only have a couple options, I think that’s kind of the goal though. Anyway, let’s not waste any more time and find out what I have used up in April. 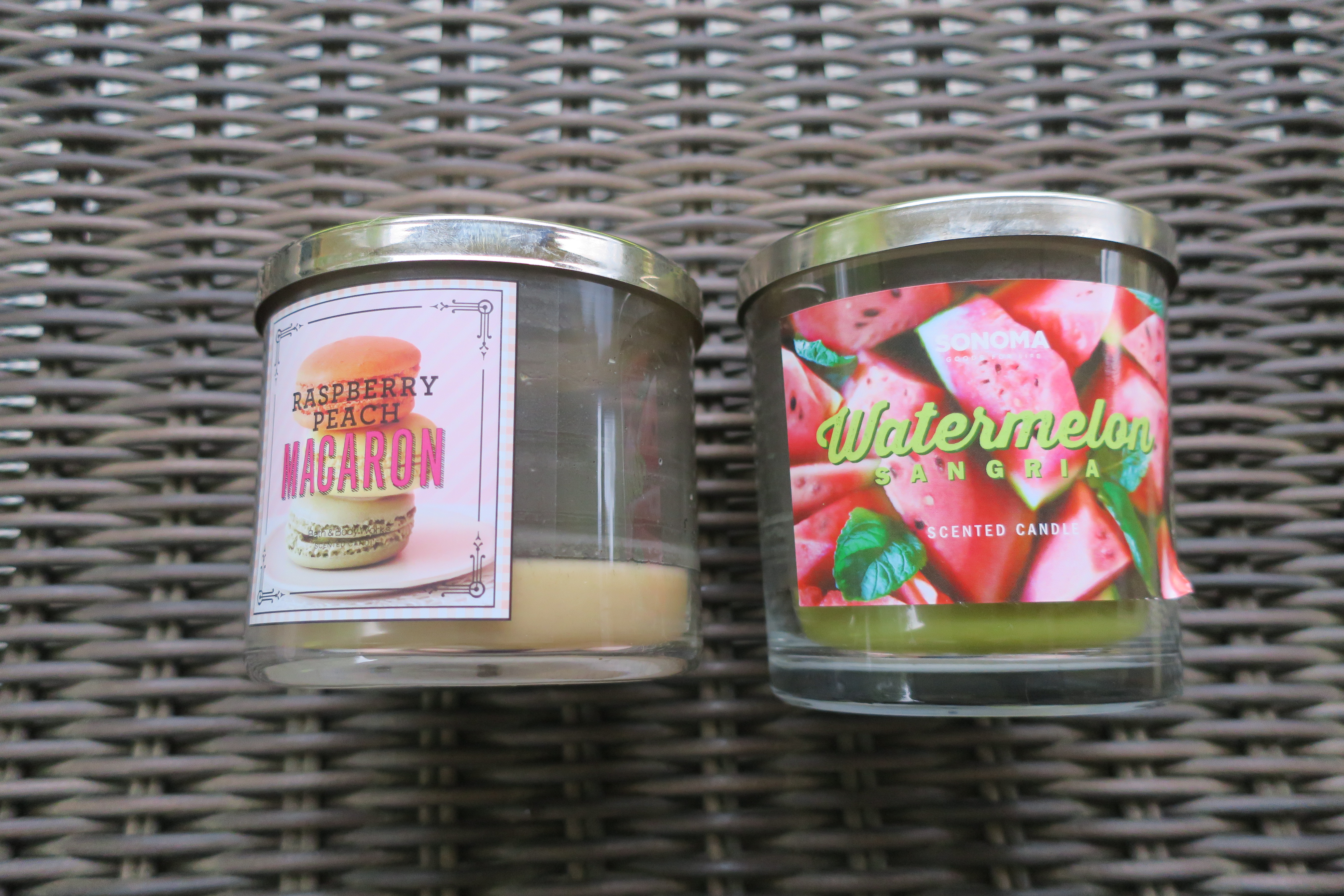 Bath & Bodyworks Raspberry Peach Macaron Candle – This one actually smelled really good but it was a tiny bit too much and too sweet. I thought it was weird how this one started peach and when the wax dries down it kind of looks green like this. Repurchase? Maybe.

Sonoma Watermelon Sangria Candle – This one smelled great and I liked way more than I had expected to when I picked it up at Kohls, this one is sweet and watermelon like but it’s not too much which is a huge plus. Repurchase? Yes. 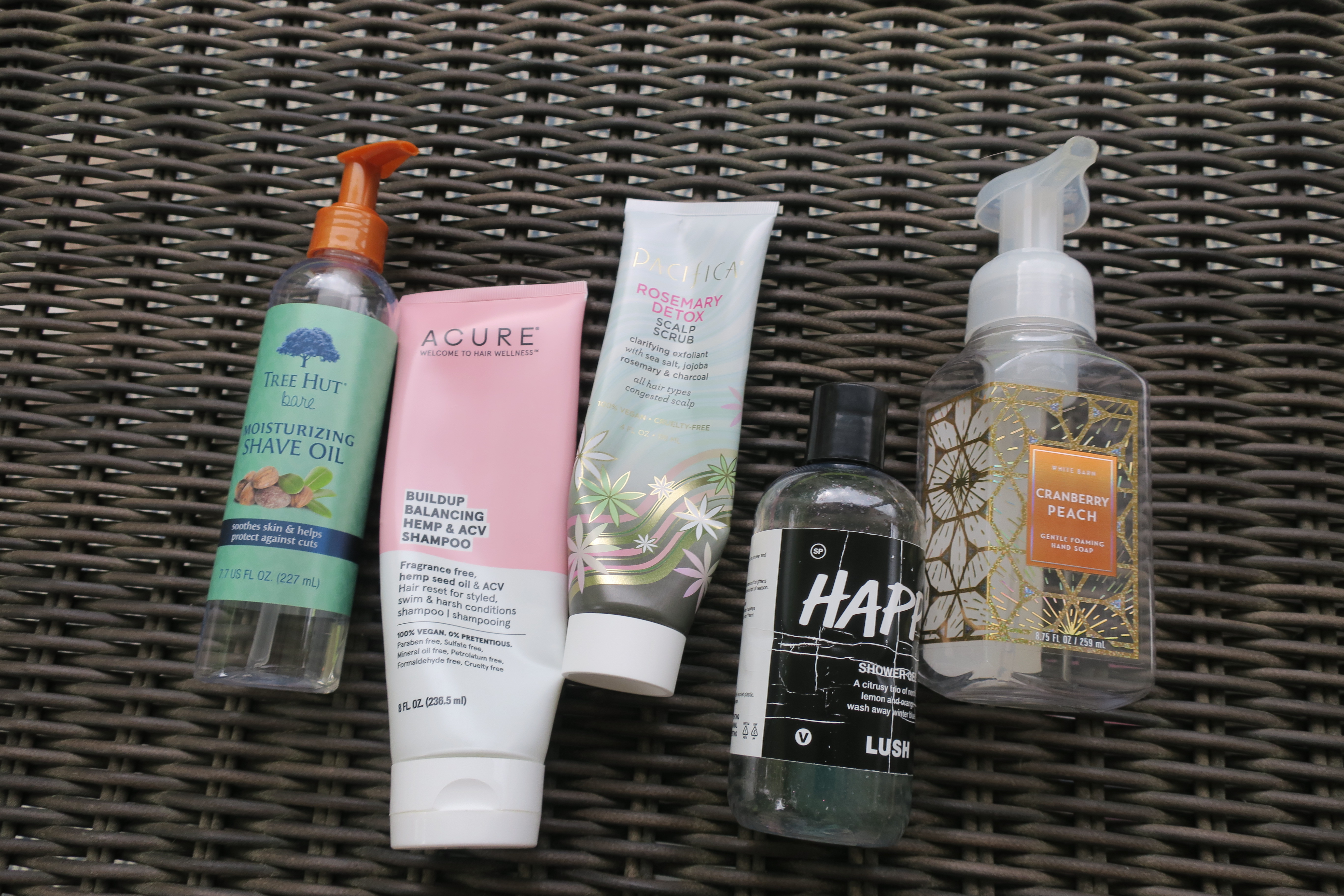 Tree Hut Moisturizing Shave Oil – I think I have mentioned this one before and if I haven’t let me say, I love this for shaving. I think this helps with a really close shave along with the fact that it smells nice and leaves my skin feeling a little bit extra hydrated. Repurchase? Yes, I already have.

Acure Buildup Balancing Shampoo – I liked this a lot more than I thought I did, not having it has made me kind of miss what it does for my hair, I didn’t use this all of the time but instead, I mixed it in my routine. This also smells pretty good, which was kind of surprising. Repurchase? probably.

Pacifica Rosemary Detox Scalp Scrub – This has a strong scent to it so if you are sensitive to scents then you are going to want to avoid this one, it smells very herbal and I hated it. I didn’t think this was a great scrub either along with it leaving my hair smelling like rosemary. Repurchase? No.

Lush Happy Shower Gel – This is hands down the prettiest shower gel that I have ever seen and I have ever used, however, the scent wasn’t everything that I wanted it to be, it smelled good but it also smelled a little bit off. Repurchase? Maybe.

Bath & Body Works Cranberry Peach Foaming Hand Soap – I love this scent and love this hand soap as you guys know, so I was for sure a fan of this one. Repurchase? Yes, I would. 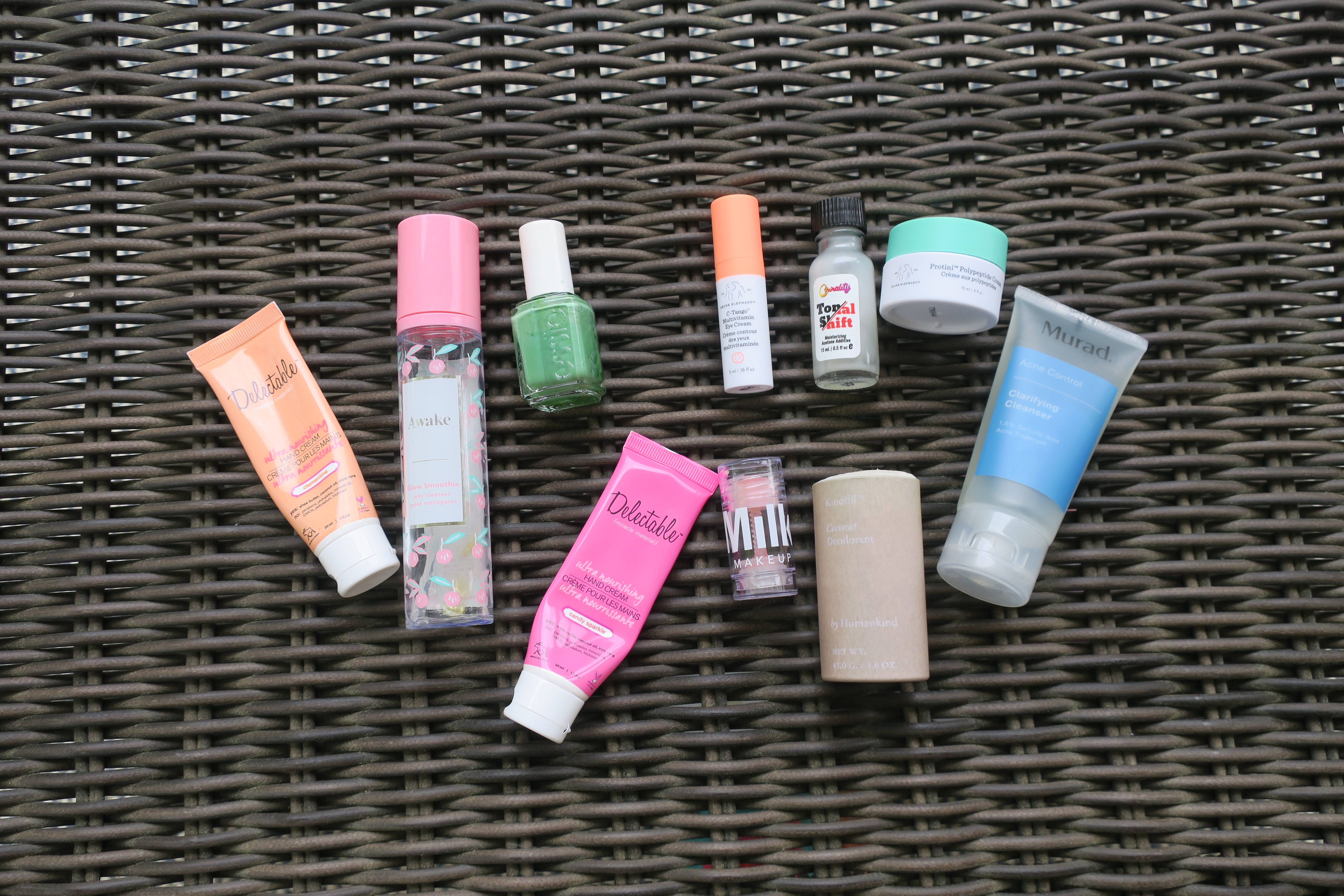 Delectable Clementine Hand Lotion – I loved how this smelled, it smelled like fresh citrus which is right up my alley and something that I really enjoyed. This formula is thick but not particularly moisturizing so it was alright. Repurchase? Probably not.

Awake Glow Smoothie Jelly Cleanser – This smells really good and feels really gentle on my skin, I think that it does an alright job and cleaning my face but it’s not great. Repurchase? Probably not.

Essie Mojito Madness – This was my favorite nail polish for a long time but it has dried up and I think it’s time for it to go, it’s still super pretty and I almost want to pick it up again but I don’t know if I need it or not. Repurchase? Maybe.

Delectable Pink Sugar Hand Lotion – This one smelled really strange to me, it was sweet but also kind of powdery and I hate powdery scents, and like I mentioned above the formula isn’t my all-time favorite so I think that this one is just okay. Repurchase? No, not this scent for sure.

Drunk Elephant Eye Cream – This is something that I have used up before because I keep getting samples, however, I don’t like this. I feel like this doesn’t do anything for my undereye area so I am not a fan. Repurchase? No.

Milk Makeup Watermelon Serum – This is a strange product, I like the idea of it and I really like that it’s in stick form, however, I don’t think that this serum really did anything for my skin other than take far too long to sink in. Repurchase? No.

Chirality Acetone Additive G-Virus – I really love adding these to my nail polish remover, I think they make it smell a little better and they really make it more moisturizing without changing how well it removes polish. Repurchase? Probably, I might not purchase this scent again though.

Humankind Deodorant in Coconut – This is what I am currently using for deodorant in a different scent which I like better. This one worked fine but it didn’t hide odor for as long as I would have liked, so not my favorite. Repurchase? Maybe, just not coconut.

Murad Acne Cleanser – I did not finish this, I used this twice and it burned my skin both times, more then I thought that it should so I have passed this one along. Repuchase? No. 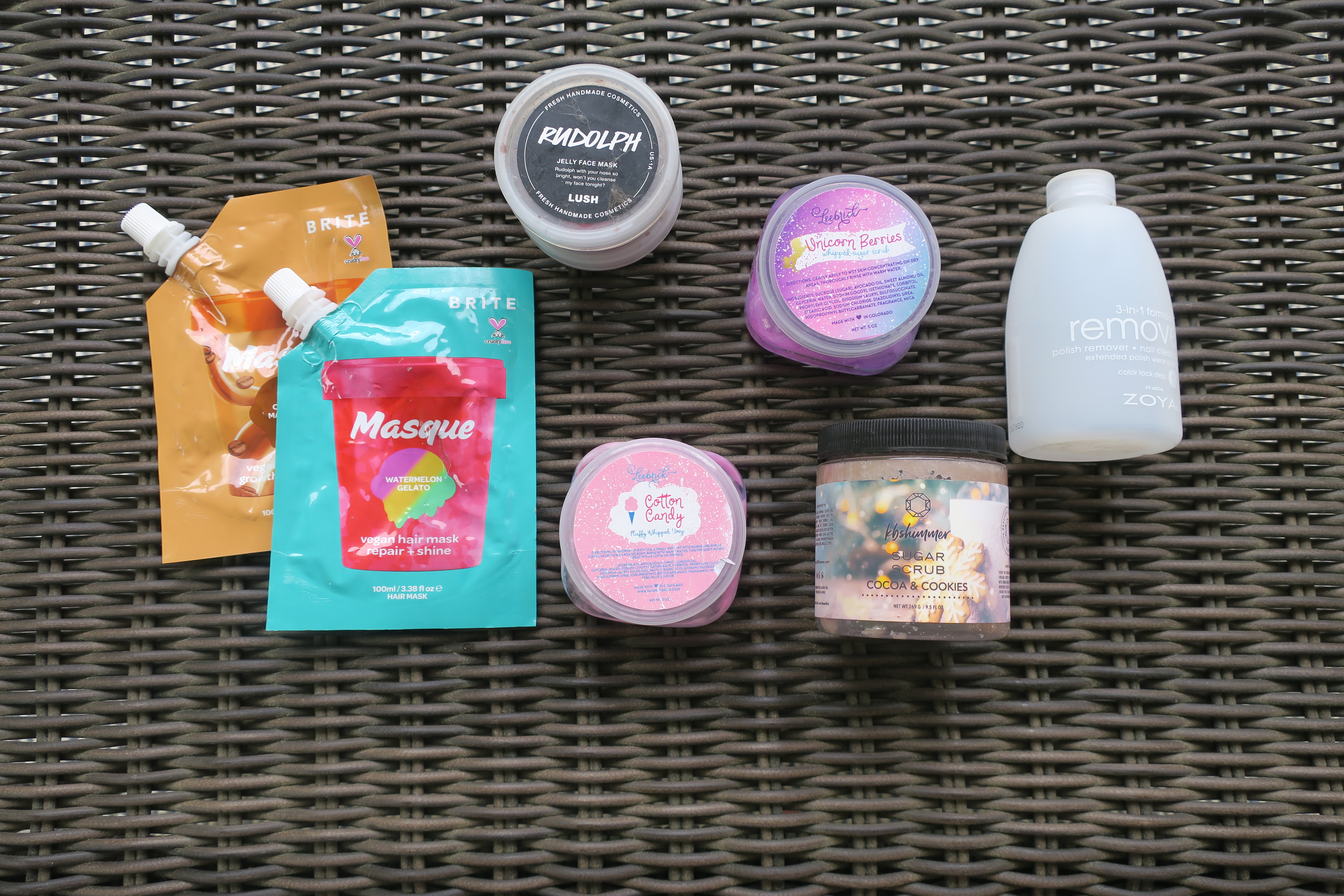 Brite Hair Masks in Watermelon Gelato and Caramel Macchiato – These are actually two of my favorites, these ones smell like they are supposed to and don’t have that weird after scent that a lot of the hair masks from this ice cream line have. Repurchase? Yes, I would purchase both again.

Lush Rudolph Face Mask – There are actually two here, one almost all the way used and the other one new, I have had these for too long and thought that it was time for them to go. These smell amazing and make my skin feel soft, but I’m not sure they really do anything. Repurchase? Maybe, because they are cute and don’t mess with my skin.

Lee Brick Cotton Candy Whipped Soap – This smells like that gummy bear body spray I had as a child, which I am hoping someone knows what I am talking about, and I love it. This is moisturizing and a little goes a long way, so I am a big fan of this and whipped soaps in general. Repurchase? Yes.

Lee Brick Unicorn Berries Scrub – This also smelled really good, I’m not sure what it smelled like other than berries and sugar but I like that. I don’t think this is a good scrub but almost a mix between a whipped soap and a tiny bit of a scrub, which I don’t mind. Repuchase? Maybe.

KBShimmer Sugar Cookies & Cocoa Scrub – I didn’t love the scent of this one, I think it smelled really artificial and strange, so I’m starting to think I don’t like artificial chocolate scents. I do love these scrubs though, they are just the right amount of moisturizing and scrubby. Repurchase? Not this scent but the product I would.

Zoya Nail Polish Remover – I have two bottles of this somehow and I’m honestly not the biggest fan of this one, it does the job and it is less harsh on my nails, but it takes a lot more effort to remove polish than just acetone. Repurchase? Probably not, but I have another one to get through.

And that is everything that I used up during the month of April, a total of twenty-four different products and I am happy with that number, though I am always hoping to do more and use up more so maybe May will be the month that I truly knock it out of the park. Who really knows? I guess we will just have to wait and see.

Have you guys used up anything fun this past month? 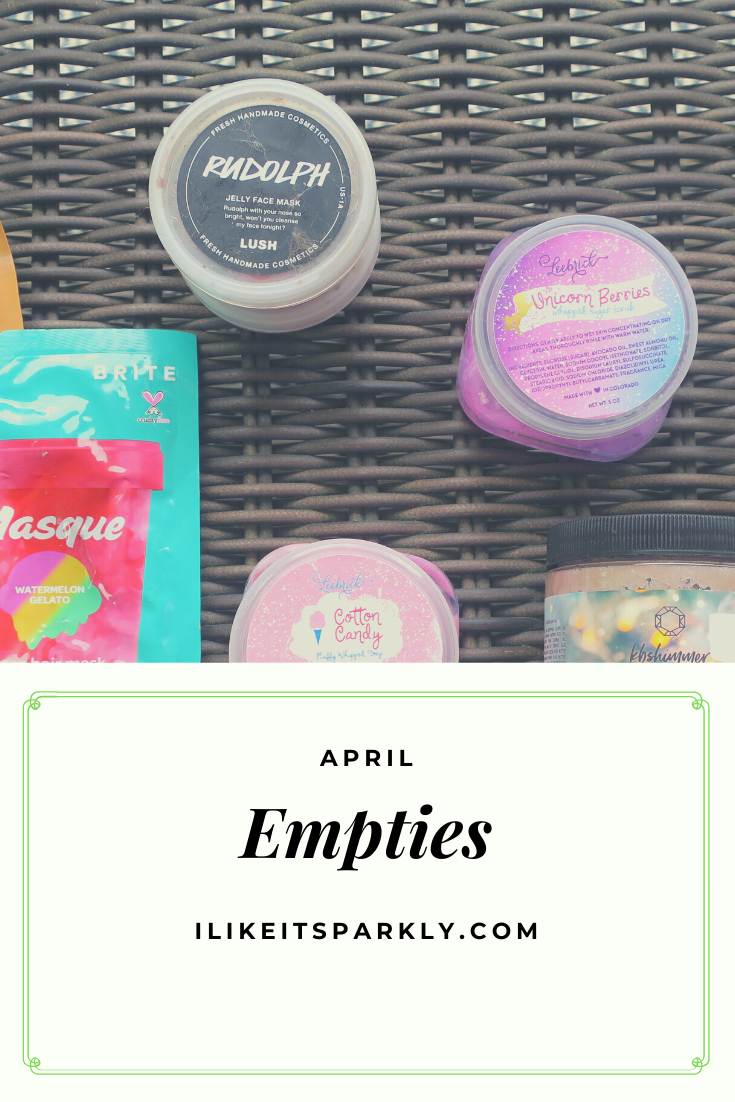