March is finally over and now it’s one of my least favorite of days, April 1st, I just hate people posting things that are fake and that I fall for, even if it’s only for a moment. I just hate April Fool’s Day. Anyway, March is finally over and I want to say that I hope April is better but as unfortunate as it is to say, I’m not sure that it will be. Only time will tell I guess. For now, let’s get into this post and talk about how March went.

I’m not sure that I would have ever guessed how crazy the month of March would be, that and how long it would be, usually March is around the time that things start to pick up if you ask me but this was hands down the longest month this year. This year has been the longest of my life and we are just starting the fourth month of the year, it’s wild and I’m sure that I am not the only one feeling this.

This month has been just one that I will never forget, Covid-19 started out as kind of a joke but things have gotten serious very quickly, I couldn’t tell you exactly when that happened but it felt like it all just happened in no time. One day things were funny, the next it started to seem like people were worried and then everything was shutting down and things started to get real. All sports have been canceled, things started shutting down, there wasn’t a whiff of toilet paper, hand sanitizer or sanitizing wipes to be found.

Going grocery shopping for the first time after all of this started happening was strangely fascinating to me, things were sold out, but there were such strange things that it seemed like people were hoarding and things that made sense to me that seemed to be overlooked. There wasn’t a lick of chicken in the building, however, there were mountains of peanut butter and pasta, which seems like great choices to me for items that could last you for an extended period of time. It was just very strange. Also, maybe it’s just around here, but no one seems to be taking the six feet rule serious and anytime I go out to the grocery store, which has been twice, people are trying to get in my space and are just talking about how stupid this all is.

I have stocked up on all sorts of goods to get me through a few weeks, both frozen and in my pantry, just so I can really minimize my trips to the grocery store. I know that I’ll probably have to go grocery shopping again at some point, but I am trying to make it so I don’t have to go every single week if I don’t have to. Also lucky for me, we grabbed a big pack of toilet paper before any of this was a problem so we should be able to get through a few months with the pack that we have.

States have started shutting down, countries as well, the state of Virginia has closed everything non-essential and at the point that this is going up I have been working from home for a little over two weeks. Things are so strange and this is for sure something that I never could have imagined happening. I feel like that is the strange silver lining of this whole thing is that working from home has been kind of great for me, but I am deeply introverted and being home basically alone hasn’t really seemed to affect me.

My anxiety has been through the roof, not constantly but when it hits, it hits hard. I’m sure this is nothing out of the ordinary for people who anxiety, I imagine people who wouldn’t say that they experience panic attacks or things like that are probably also experiencing more anxiety than usual. I feel like this is normal, this is a scary time to be alive in.

This is a terrifying time in history and I can say that I don’t like living in this time at the moment, but there isn’t much I can do about it. I am able to distance myself, work from home and am lucky to live in a more rural area that hasn’t been near as affected as more metro areas. I can’t even imagine living in a city at this point in time, but my heart really goes out to those people. I know we’ll make it out of this but I don’t think anything will ever be the same again and I have no idea when things will start to feel ‘normal’ again. I’m not sure that anyone really knows that.

I feel like I have rambled on for way too long here, but I was just kind of allowing myself to get it all out, so I’m sorry if this one was particularly long, rambling and maybe even a little unorganized.

Lets go to a little bit of a lighter topic and talk about all of my goals, starting with how my goals from the last month went. I have crushed my goal of decluttering which is probably due to all of the time that I have had, I am still not done with everything that I want to get done but I have made some serious progress. As for a workout routine I have failed at this, I have worked out more this month than any other month this year but I haven’t really gotten into a good groove. And the last is packing my lunch which started out rough but being at home so much now means that I have been eating at home a lot more than I once did. Now, let’s talk about goals for this month.

I want to get into a good workout groove because I have a super flexible schedule at the moment and I think that means now is a great time to really get myself going. I want to get ahead on my reading challenge which is another thing that I think should be pretty easy still. And I think that’s really all I am going to set for myself this month, keep things pretty simple and calm.

I know everything feels crazy right now and like everything is on fire, but it’ll get better and if you ever need anyone to talk to I am always here to listen, that way anyone who needs it can get some worrisome thoughts out because I know it helps to have someone listen. Stay safe you guys.

How has March been treating you? 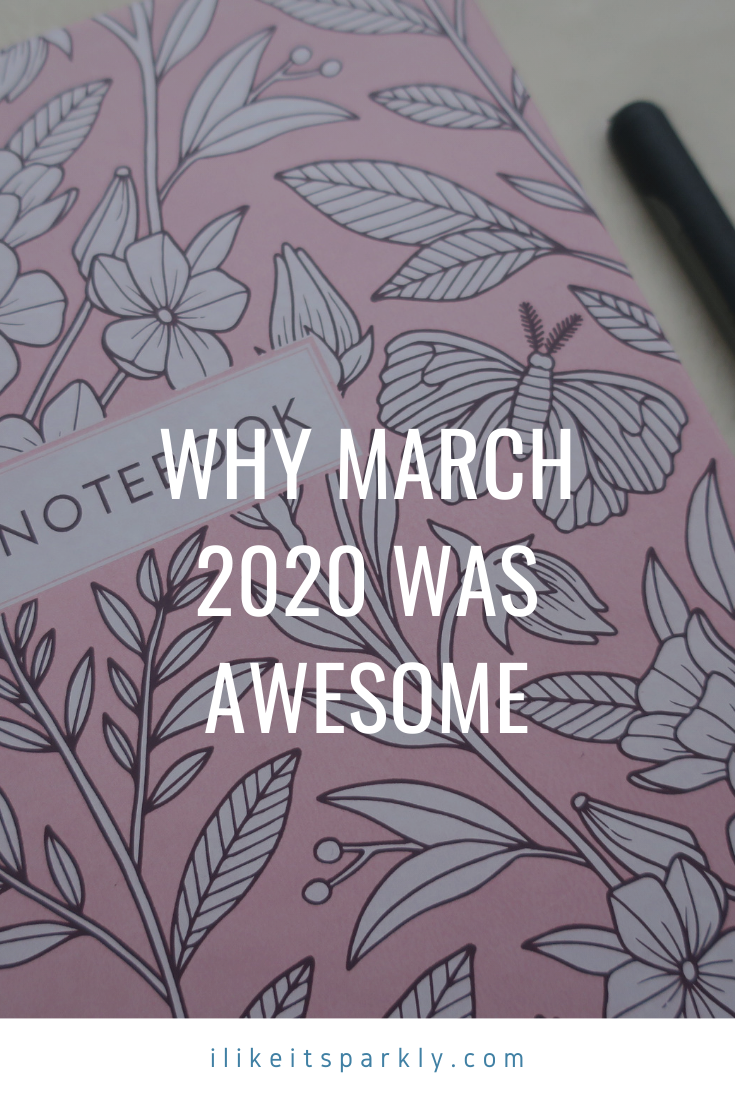