It’s already November and I can’t believe that October really flew by but I am kind of glad that it did because the month wasn’t a fantastic one for me, plus since it’s November that means it’s vacation time. At the time this post is going up I am on my way to Orlando for the week, which I am super jazzed about but you guys will hear more about that at the end of this month I’m sure. So, let’s talk about October.

October has been boring and also not great, the month really flew by and was over before I knew it, which I’m sure is how the rest of this year is going to go. I am excited about the Holiday season but I’m also not ready for it to fly by. I guess I’m just going to have to make it last and really enjoy my time.

October started out slow then about mid-October I pulled something in my left leg, it wasn’t too horrible and I could walk, but it was pretty constant and irritating. Luck for me that healed up pretty quickly, however unlucky for me I got injured again. I will try not to go into too much detail but I was walking through the house, minding my own business when a big ole splinter shoved into my foot. A trip to urgent care and an hour and a half later it was out, however, I was to keep it wrapped until it healed up more and had a super hard time walking on it because it was on the bottom of my foot. Also, I got a tetanus shot and had a fairly normal reaction to it but not a great one to it. My arm swelled, got red and hard for a few days, it was not great.

The house is coming along and that is exciting, we have drywall and they have started painting. They have also finished the trim on the outside of the house and should be working on the porches here shortly. We should also have power here very soon, which is exciting. I am just ready for it to be done. The estimated finish date for it has been pushed back a couple of weeks but that much I can handle.

Other than that the month was fairly normal and calm, nothing too exciting, just working and doing what I usually do. So, now let’s get into goals.

As for finishing my decluttering, I would say that I have done pretty well with that one, I’m not sure that I am really finished for good but I have done the bulk of it, now I am fine-tuning and trying to use things to see how I like them. I’m sure I’ll have more to let go of but for now, I would say I am done. I did not get two books ahead either, which is a bummer, I felt like I had been reading a lot but apparently, I have not. I am only two behind though, so I think I can catch up. The last thing is working out four times a week which I for sure did not do, with my leg and my foot I didn’t do a lot of moving, I feel slightly bad about it because I feel like I’m hiding behind injuries, but my foot really hurt so it’s something that I wasn’t going to do until it felt better.

This month’s goals are to get four books ahead of schedule, I know I have said it before but I really am hoping to be able to do this, I have an 11 hour each way drive coming up and I’ll be reading during a good chunk of it, so hopefully I can get ahead then. I am also hoping to get back into some sort of workout groove because I have fallen off but I am determined to get back on. My last goal for the month is to get ahead on my scheduled posts. Blogmas is coming and having posts written will be super helpful, so I am hoping to get through a decent chunk of posts for December, that way I am not rushing.

Overall, October was alright, it wasn’t a great one but it wasn’t bad either, it just meh.

How was October for you guys? 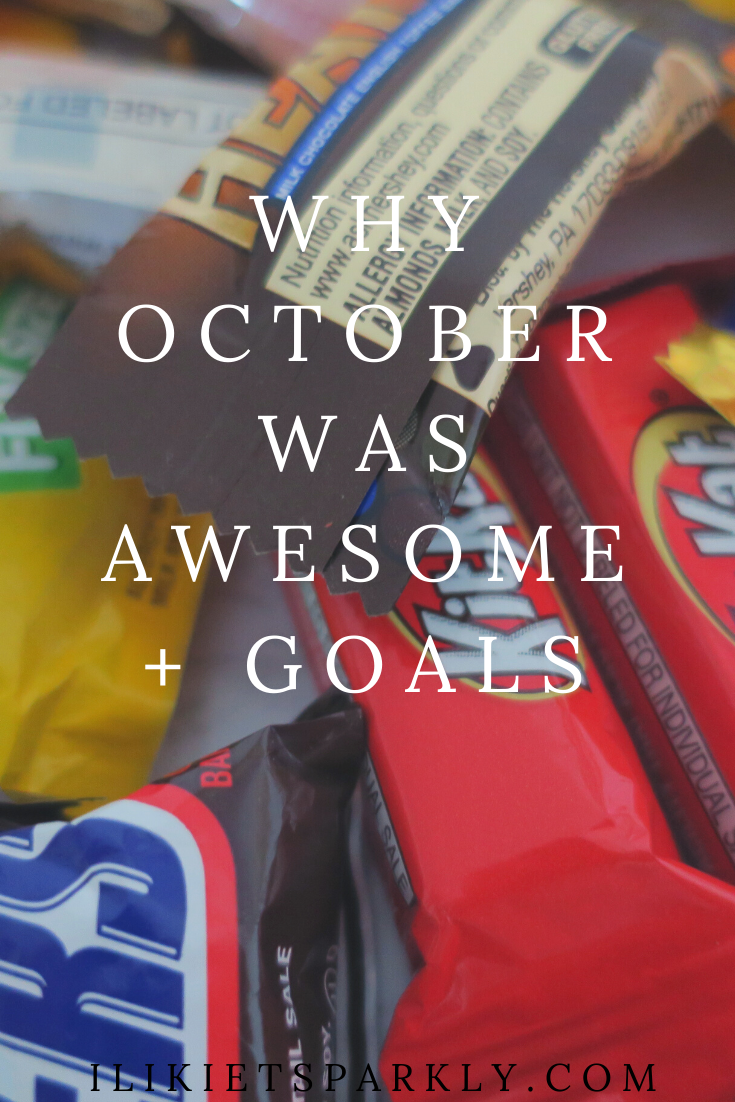