I can’t believe it’s already time for my third update on this project, but here we are, September is already over halfway over and we have just a little over a week left. The end of the year is already flying by too quickly and I don’t like it. But that’s enough of that, this is my final update before my finale in December so let’s see where we are in terms of progress.

At this point, I think it is safe to say that I will not be finishing this in a timely fashion, I have used this only a couple of times since my last update so I haven’t really shown any more progress in this one. This one is a tough one but I am hoping to make at least a little bit more of a dent in this one before the year is over.

This one I sat on my desk at work and demolished it, I’m pretty sure that I eat lip products at work, I’m not sure what it is but having them sitting on my desk makes me really want to use them, so I think that’s what I will be doing with all lip products from here on out.

I really don’t like this color and haven’t picked it up but maybe one time since my last update, at this point I think it might just be time to declutter this one because I don’t think I am going to finish it up.

I am going to have this pigment until I get bored of it or until I’m 40, I’m not sure which. I have used this a handful of times since my last update but it really doesn’t feel like it, it still looks barely touched. I’m not sure I’m ever going to get through this one.

I finished this one rather quickly and haven’t had it for a while not, not my favorite lip balm ever but it wasn’t completely terrible either.

I used this regularly for so long and have completely forgotten that I own this, I haven’t used this very much during my last few months between update, however, hopefully this will remind me that I have this and should bring it out. Not sure that I will finish this one by the end of the year but will make pretty decent progress.

I just didn’t like this that much, I used probably about half of it before finally giving up on it. I felt like this left my face looking super powdery and just not so good, so this one has been decluttered and passed along.

I have realized that I just didn’t love this shade of lipstick, I really wanted to and was trying to convince myself that I did but I don’t, so this one has since been passed along.

I have used this more and I still love this palette, it’s a really great one though at this point I feel like I am doing a lot of the same looks with it and really need to try and switch it up so I can hopefully finish it. I have completely finished one shade, there is nothing left in the pan and I have pan and dips in pretty much all of the other shades.

I have been using the full size one that I have and have made some progress on it, though not as much of a dent as I may have liked. I have too much stuff so sometimes focusing on one product is a bit tough but I have been trying to work this into my routine. I do love this primer and will finish it at some point, that’s for sure.

This has finally died on me, it has dried out and just doesn’t look great anymore. I loved this eyeliner because I thought it was really interesting to mix in here and there because it was dark like black liner but it wasn’t

This is probably going to be the next thing that I sit on my desk to try and use and maybe I will actually use it. I’m not sure. I have barely used this since the last update, maybe a handful of time at most so I am not really making a ton of progress on this one.

I haven’t touched this eyeliner since my last update, I want to play with it and have fun with it but it’s just not something that I have been feeling particularly inspired by, so I will have to try and use this more but I’m not sure if I have it in me.

I have used this blush a fair amount since the last time I update but it doesn’t really look like that much of a difference in it to me. This one has a pretty good size dip in it and I think I am getting really close to hitting pan with this one, but I am not there quite yet. I don’t think I’ll finish this by the end of the year but I think I will hit pan.

Lip products really do take some time to get through, I always think I can breeze through them and some of them I can, but for the most part I need more time than I think to really make a dent in one. I have been using this and I do find that this is a really easy one to use, it looks great and goes with pretty much every look I do, but it doesn’t really look like I’ve made much more progress with this one.

I seriously don’t know what is wrong with me and this liquid lipstick but I have touched this maybe once this year. I really need to try this out and at least find out of I like it, but I haven’t done that yet for whatever reason.

I used this a good amount of the summer season and even featured it in some of my favorites for the month and my weekly favorites, this one is really natural and pretty though it does have a little bit of a learning curve when it comes to application. I still think this is a fantastic one and will continue to use it in the winter.

I have decluttered this since my last update, I think this is a nice palette and have nothing against it, I just personally got mine from someone that I no longer talk to so every time I would pull this one out to use I would be reminded of that person and I wasn’t really a fan of that. So off this one goes.

I am not doing as well on this project as I wanted to, I feel like I never do as well on these project as I want to. I can for sure empty some products and enjoy them but something about putting them in a project pan almost makes them dead to me, it’s really annoying. I am making some progress and that is nice, I am hoping to make some more in the last stretch of this year but we will just have to wait and see how that goes.

How have you guys been doing with your own projects? 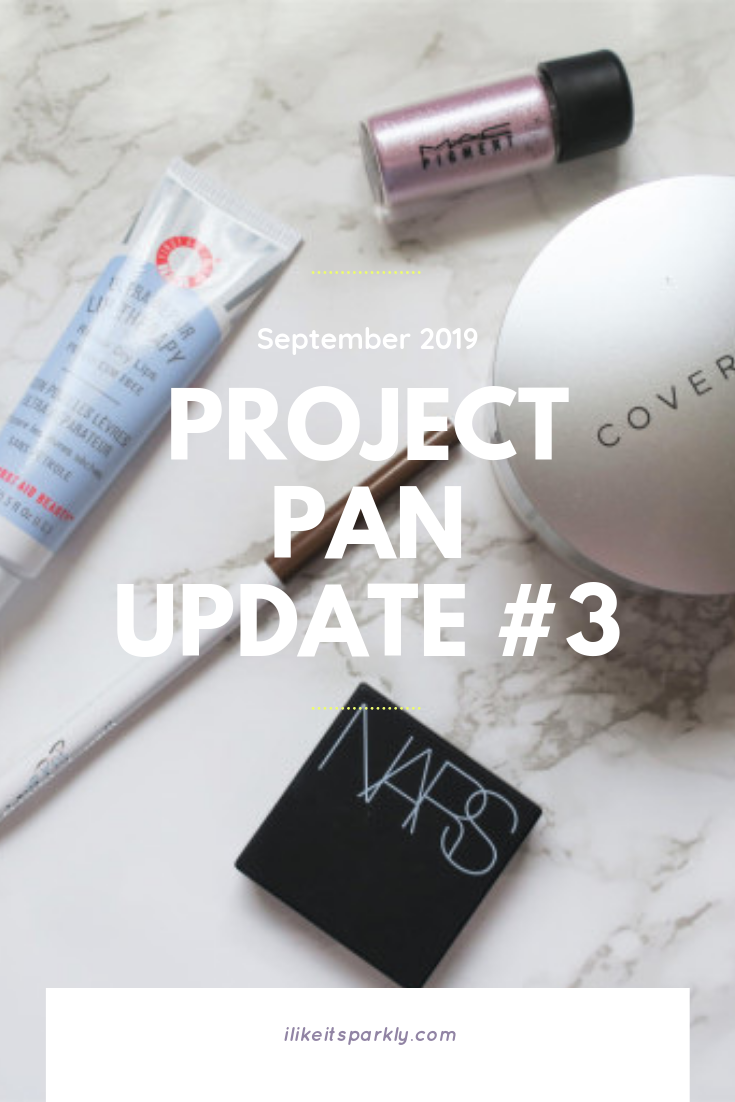