Yes, it is already time for an update on my project. I can’t believe that it’s already been three months but at the same time it feels like it has been forever since I have checked in on this project, so let’s jump in and see how my progress is going on my main project this year.

I think this one is going to be impossible to completely use up because a little goes a long way and the container of this is actually so big. I have used this a handful of times and really enjoyed it, though I am thinking I will be using it a bit more over the next few months so hopefully that will make a little bit of a dent in this product.

I am still letting this live in my purse and have been reaching for it more frequently the past few months because I am trying to keep other products out of my purse instead of hoarding them like I typically do. So, this one is finally getting some use but still not a super noticeable amount.

I have been trying to use this but I really don’t like the color, I’m not sure why but this shade seems to lean a little to red for me and way too dark, so because I have other products that I have been enjoying much more it is making it very hard for me to want to use this one up. I am thinking about decluttering it but will probably give it a little more time.

This feels like it’s never ending and something that I should have never tried to pan, sure I haven’t used this a ton but the few times that I have look like I have barely touched it, so this one is going to truly be a challenge.

I finished this one during my last check up, so this one is long gone and honestly, I wasn’t a huge fan of it.

I am still loving this as a highlighter even though I know it is technically an eyeshadow, it’s just such a soft and pretty glow on the skin that I can’t stop using it. This does feel like I have started a pretty good dip in it since I last updated, I really think I am almost to hitting pan on this one.

I just didn’t like this that much, I used probably about half of it before finally giving up on it. I felt like this left my face looking super powdery and just not good, so his one has been decluttered and passed along.

I have finally used this a few times and I am unsure of how I feel about this shade one me, but I’m still playing with it and giving it a shot, but as usual I have not used this nearly as much as I wanted to.

This is a fantastic palette and I find myself reaching for the every now and again, but still pretty frequently. My progress is slow but is being made with this one because it is such an easy and quick palette to use.

I think am finally to the point where I have started using my full size one, which is really exciting because that means maybe I can make some real progress with this product and actually start widdling it down. I have so far used two smaller sizes up completely, so I think that should count for something, right?

I have used this a handful of times and I think it’s really fun, it almost looks black over most eyeshadow looks but if you look closely you can tell that it is green and I think that is really interesting in a subtle way. I am concerned that this drying up though so I am not sure how much time I’ll have left with it.

I have barely touched this still, I do not know what is wrong with me. I think this is a really pretty shade and it’s probably my best chance at finishing a lipstick, but I am still sitting on it and not using it nearly enough.

This is such an easy blush to use, it looks great on me and goes with pretty much any and every single look that I can come up with, it is really fantastic and I am a big fan. This is starting to get a pretty big dip in this and I’m not sure if I can finish it by the end of the year but I am sure that I can hit pan at the least. I am hoping to do so by my next update but we’ll just have to wait and see.

I really do love this lip product, it’s really easy to wear and looks good with just about any look, it’s also easy to apply and lasts for a good amount of time. I am very slowly making my way through this one.

I haven’t touched this one at all yet, I have no idea why but I just haven’t, I really need to and I am going to make it my goal to use it at least five times by the next time that I check in, I think I can manage that much.

I have been using this more since it started getting warmer outside, it’s just really lightweight and easy product to use. A little bit goes a long way though and I am not sure how far I have actually made it with this but I have been using it.

This probably wasn’t my best idea ever  to throw this one in here because two palettes is hard to juggle, especially since both of them are neutral palettes and I do like fun colors too. I haven’t touched this one but maybe two times since my last update, I just haven’t been focusing on this one so I’m not sure how this one is going to go.

I don’t think I’ve done as good as I would have liked with this update but I still have six months left, so there is for sure still time for me to use up some products or make some serious dents in things, I’ll just have to wait and see how it goes. I have decluttered one thing since the last update and haven’t finished a single thing, however, I have made some dents in things so I guess I’m not doing terribly. I am at the halfway point with this project and I am not sure how I am going to do by the end, so I guess it’s just time to wait and see.

How have you guys been doing with your own projects? 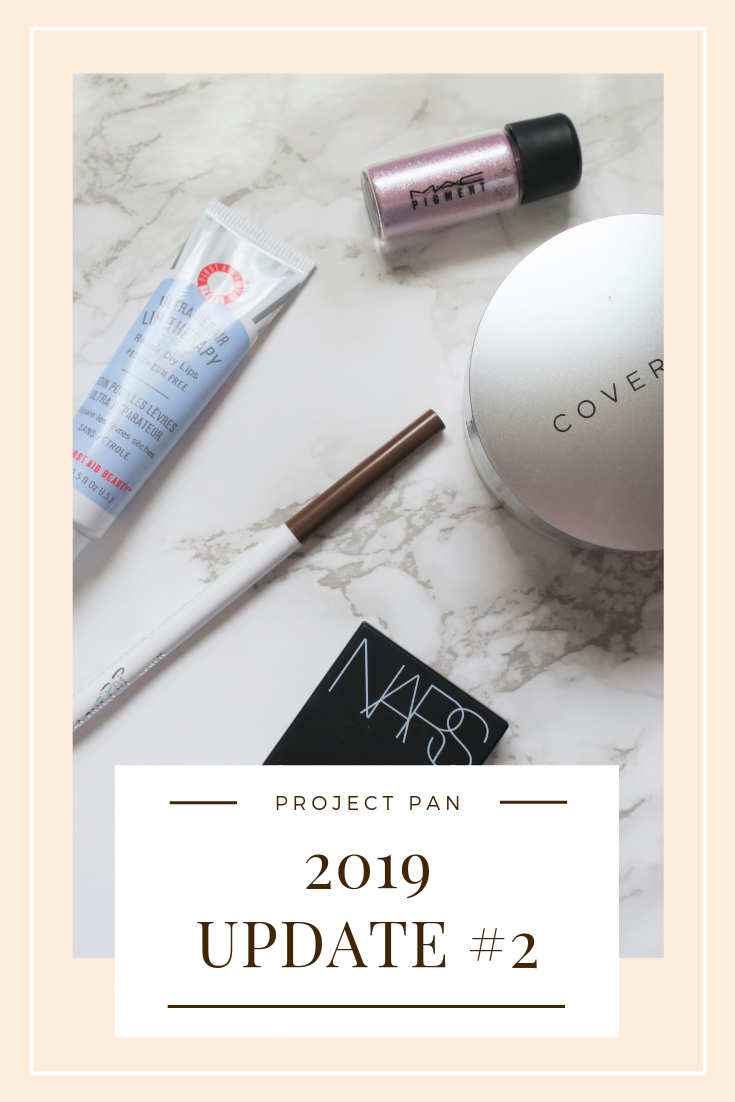