I know, I am so behind on this trend, I am just really behind on youtube videos and when I planned out the schedule for April I was watching a lot of these and really wanted to write a blog post about this, so here we are. I will be looking back at a few of my very first Sephora purchases and talking about the products a little bit, so let’s go back a few years and talk about some products that I may or may not still have.

Alright, I am not that much of a Sephora shopper and I am even less of an online shopper at Sephora, I much prefer going to the store so my online orders are a bit all over the place but I did place my very first order all the way back on November 8th, 2012. I was nineteen years old and this might have been my first Sephora purchase all together ever. This was a limited edition product and they haven’t sold this in years, I also haven’t had this in years, but when I did have it I remember loving it, especially the bright limey green shade. I always thought it was so fun and worked it into too many looks. This was my very first taste of bright colored eyeshadow and I really loved it, though eventually parted ways because the formula wasn’t that great and I had moved on to better things.

This was purchased because I was going through this whole fragrance phase and what I have learned since then is that I don’t like a lot of fragrance in terms of perfume, there are some but finding a scent that I loved was much harder than expected. This order was from four years later on August 4th, 2016. I did actually use one of these up I believe, I got rid of two and I still have one that I quite like and am slowly making my way through even though these are tiny. I can’t believe these are three years old though.

Let’s fast forward to January 16th, 2017 when I went in-store to find something and ended up getting it shipped to me while I was there because I couldn’t find it. I loved this set so much and have used up some of the products in this set. Sephora Favorites sets are always my favorite, they seem to be really well priced while also giving a really good range of products to try out and I am into that for sure. 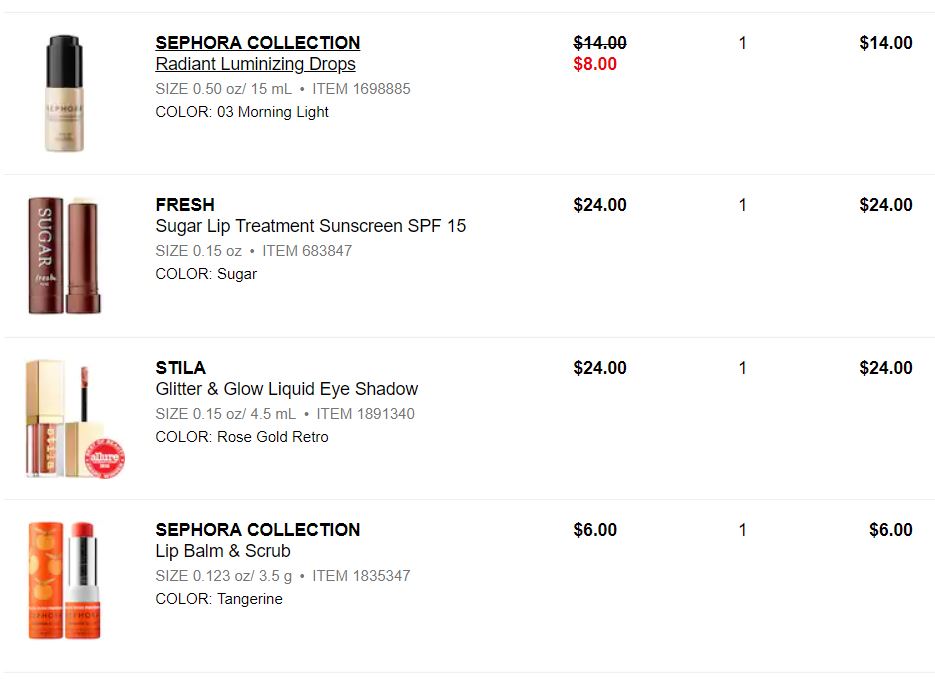 My purchase came not too long later on January 23rd, 2017 and this one came into existence because I had returned something and got a gift card for it, so that was burning a hole in my pocket.  I hated those luminizing drops, I really tried to make them work but they were really thick and not like drops at all. I used that lip balm up until there was nothing left, it has been my favorite for a while and I don’t get it too often because it’s expensive, but boy do I love it. I still have the glitter eyeshadow and still love it, it hasn’t dried up or anything like that and it is super pretty with minimal fallout. I believe I finished up that Sephora brand lip balm as well and it was alright, I remember liking it fine but not thinking it was anything special.

On April 20th, 2017 I picked up a single mini sized Hourglass Ambient Lighting Powder because everyone talked about how amazing this stuff is. I hated it when I first started using it and actually ended up selling it because I barely used it and just didn’t like the way that it looked on the face. I do own it again in a palette and I’m not sure if the formula is different or what but I adore this powder now. I think I just didn’t like it before because of the foundation I was using with it. 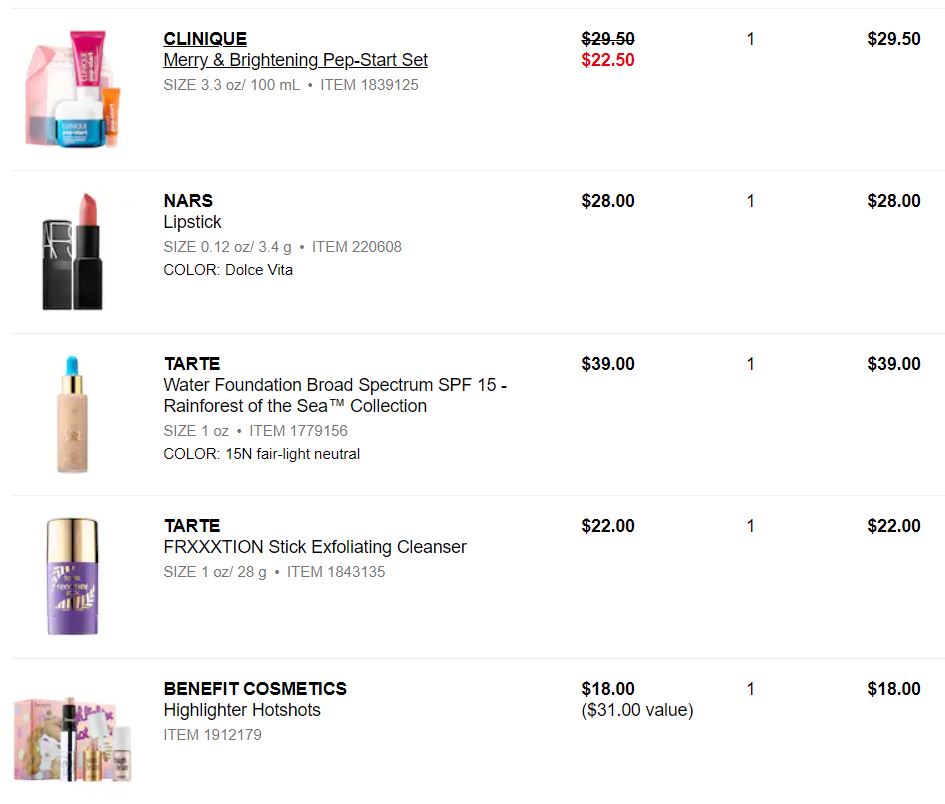 My last order for this post was just a few days later on April 26th, 2017 and I know this one came to be because I had a coupon and this girl loves a good coupon. That Clinique set was so good and I enjoyed it so much, I really need to get another jar of that moisturizer because it’s great. I still have that Nars lipstick and I still love it as much as I did when I first got it.  I finished up the Tarte foundation and quite enjoyed it, though I am not sure that I would purchase this one ever again. As for the Tarte cleanser, I would purchase again but haven’t in a while. I have been through either three or four of these and loved every single one. I haven’t picked on up in a while though. I was so excited to get this Benefit set, I had heard nothing but great things about the Benefit highlighters. I still have the high beam mini and I quite like it but don’t use it nearly as much as I should.

I did have some Sephora play boxes between a lot of these purchases but I didn’t want to share that because I thought it would be boring and there was no way that I would remember everything in each box. I also didn’t want to get too recent so that is why I stopped where I did. As you can probably tell, I am not that much of a Sephora shopper, I’m much more team Ulta.

I just have to ask, Sephora or Ulta? And why? 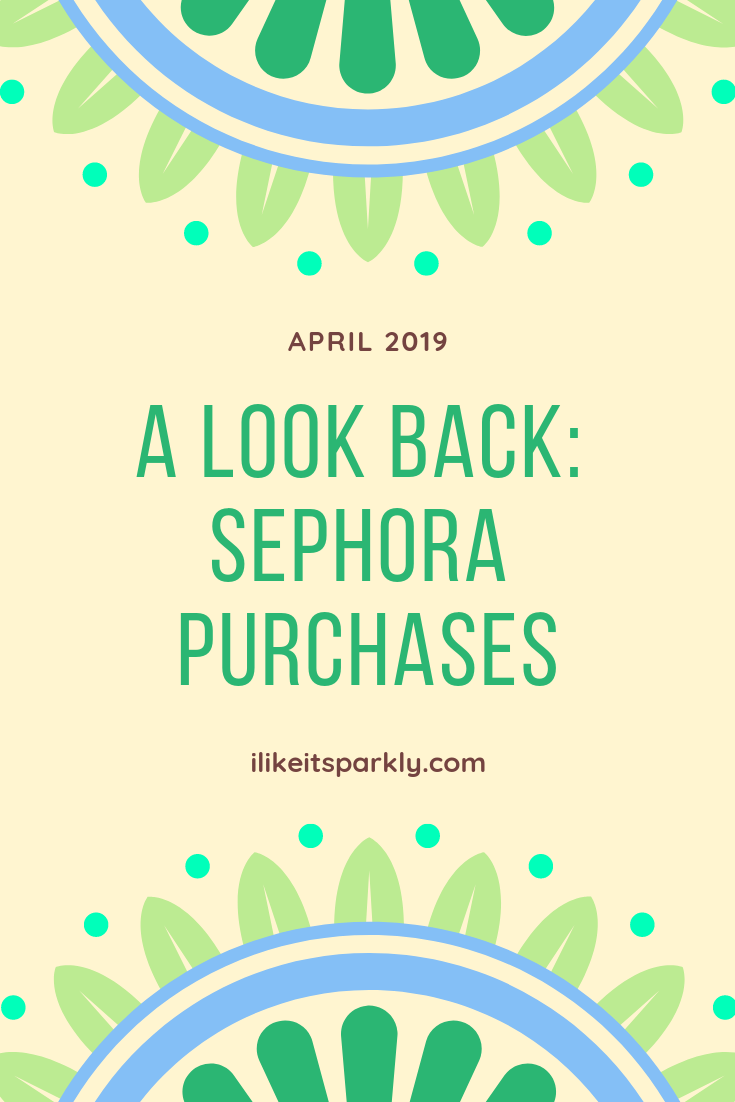 2 thoughts on “A Look Back: First Sephora Purchases”